This would be the third location for the project, which is a replacement for the now-closed Northcrest Arena, after plans fell through at Trent University and now Fleming College.

“The short answer is yes, Morrow Park will be the home of the new twin-pad arena,” said Coun. Lesley Parnell, chair of the city’s arenas, parks and recreation portfolio. “In my opinion, the sooner we can get the shovels in the ground for that, the better.”

A report to council on Monday stated Fleming College was focused on its recovery from the pandemic.

“Staff anticipate it could be several years before Fleming College is in a position to consider future development on this site,” the report stated.

Fleming College president Maureen Adamson told Global News Peterborough on Monday that “a more accurate characterization is that we have no plans for that land in the future.”

“We’re working on a 12- to 24-month plan for recovery for the college. No plans for that land. We’re not pulling it off any potential,” Adamson said.

Adamson said that without provincial and federal funding, she felt it was difficult to see the arena plan coming to fruition at Fleming.

In August, the city announced it had failed to secure provincial and federal funding for the estimated $50-million project.

“I’m happy to help out in any way I can,” Peterborough-Kawartha MPP Dave Smith told Global News Morning Peterborough on Tuesday.

“What I would say to city council, though, is if I give you advice on what you should be putting in for funding, you need to listen to my advice. If I tell you the cap is $50 million, you cannot come in over $50 million and if you do, it won’t be considered,” he said.

Smith said he liked the idea of having the twin-pad “in-conjunction to the Memorial Centre at Morrow Park” but the process needs to be completed.

“There was a lot of time spent talking about building it at Trent University. That was provincially significant wetlands. We really lost five to six years (off the project),” Smith added.

Parnell said that “for now,” the general committee has decided that Morrow Park is “the best place” for the twin-pad arena.

“We’re going to have to do a bit of a redesign because we can’t use the design for Trent or Fleming because it’s not efficient for this location.”

Parnell said location on the large Morrow Park property is another consideration as the land could also be used for the future location of a multi-sport and event centre (MUSEC) that would replace the Peterborough Memorial Centre.

“That needs to be taken into account. We need some money in the budget and we’re going to have to borrow some money,” she said.

Council also has an appetite to potentially locate the Peterborough Memorial Centre replacement at Morrow Park, despite a consultant’s report that advised putting any planning for that facility on that property “on hold” for now and putting the facility downtown instead.

Sierra Planning and Management of Toronto has stated its preferred location is near the downtown, including the former public works yard on Townsend Street and Market Plaza on George Street.

“Every single downtown location is either not owned by the city, not for sale, contaminated or in the flood plain,” Parnell said. “It’s very expensive to acquire and get those sites ready to build — millions of dollars before we can get shovels in the ground. 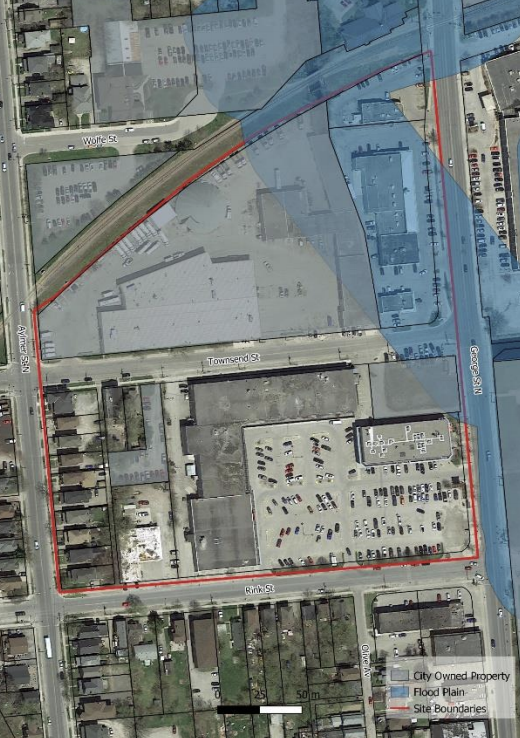 Coun. Dean Pappas, who chairs the city’s financial portfolio, said the city shouldn’t dismiss Morrow Park but he would still prefer to see the major facility eventually built downtown and suggested the former Baskin Robins site as a possibility due to its centralized location.

“It’s a big economic revitalization building. I’d love to put both buildings in the downtown, but we need realistic fallback plans and a partner comes and says, ‘I want to build it now,’ it’s best to have a fallback plan,” he said.

The consultant projected costs for the 5,800-seat facility between $91.3 million and $97 million in “today’s dollars.”

The consultants note that the redevelopment and enhanced assessment potential of the area is $193 million. The estimated potential increase in annual tax revenue from redevelopment based on 2019 rates is $3,154,050.

“It would cost us $4.3 million a year in mortgage payments for 30 years,” Pappas said. “So that’s about $129 million, so you’re paying roughly $39 million in interest plus the consultant said most arenas are losing about $600,000 a year so you need to add that subsidy to it. So it would cost about $5 million a year to run that facility in today’s dollars.”

Other potential sites include the former Baskin Robbins ice cream plant along Aylmer and Simcoe streets and a parcel of land on Wolfe Street, according to the report.